Curtis Acosta – who coincidentally celebrates his 5-year anniversary of joining OnQ this March – offers a glimpse into the prototyping process in this latest installment of Retail Voices. Unlike many of his colleagues, he spent much of his career outside the retail industry before coming to OnQ.

Tell me a little about your background, and how you wound up at OnQ.

I spent 25 years in the defense and aerospace industries before finding my way to OnQ. During that time, I worked with some of the biggest names in the business, including Boeing, BAE Systems and Lockheed designing and fabricating composite parts for defense missile programs as well as combat vehicle and body armor systems. It was highly classified work that to this day I still can’t talk about publicly.

Coming to OnQ after two-and-a-half decades in the pubic sector seems like an abrupt change of course in your career. How and why did you make the switch?

In many ways, my work in defense and aerospace was the perfect training ground for the work I’m doing at OnQ. Working on classified projects in the public sector is highly regulated and structured. To be successful in that environment, I learned quickly how to operate under constant scrutiny and structure. I was accountable for making sure my team of fabricators delivered as expected every time. After a very successful 25 years in the public sector, I felt it was time to explore opportunities in the private sector.

I can see why you chose the private sector for the next phase of your career. But why OnQ?

Throughout the interview process, the workplace culture was what first drew me to the job. I could tell people here genuinely enjoyed working together – sort of a “work hard and play hard” vibe that was unlike anything I experienced in my previous jobs. That change was refreshing. But what ultimately sold me on the job was talking with Paul, the CEO. He has a very entrepreneurial mindset, and he made it clear that I would have the creative freedom to take the skills I honed over the past 2+ decades and apply them in entirely new ways, in a brand-new industry. From that point on, I was sold on the job.

So tell me a little more about your role at OnQ.

I’m the senior product developer. I run the protoshop, which is where all the prototyping takes place. I get involved once the client signs-off on the final design. I take conceptual and technical drawings and bring those to life. It’s exciting because the prototypes I get to create are the first physi cal representations of drawings that took months to refine. Once the team confirms the fit and finish, we’re ready to send the job to production.

Having been at OnQ for five years now, has your view of the retail industry changed at all?

Well, technically I started my career in retail selling motorcycles (did I mention that I also tested and raced motorcycles professionally?). So I’ve seen the retail industry from multiple perspectives. But over the past five years, what’s been most interesting is getting a behind-the-scenes look at how some of the biggest tech companies in the world address the retail space. It’s a really competitive market, and I love that we get to play an important role in how those companies present themselves at retail. It’s so gratifying to walk into a store and see a display that we helped design. In fact, my kids and I have a running challenge to each other to snap pics of OnQ displays we spot while we’re shopping…and we take a lot of those pics!

Wait, you tested and raced motorcycles?

That’s right. My dad was a well-k 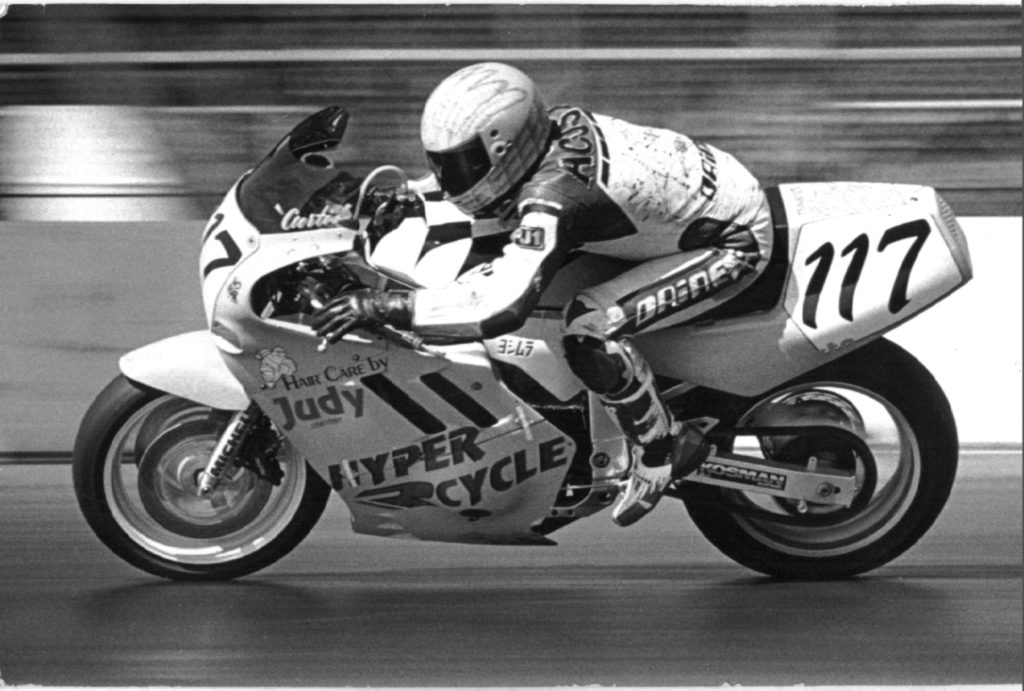 nown custom car designer, fabricator and artist, and my mom owned and operated a very successful R&D machine and fabrication shop. So I definitely grew up in a shop environment, and motorcycles were my thing (still are). That passion led to some great opportunities, including testing and development of high-performance motorcycles, and ultimately racing in the F1 and Superbike circuits for a number of years. And while retail displays and high-performance motorcycles might seem like polar opposites, my experience with motorcycles taught me a lot that I’ve applied to my work in defense and now in retail. I learned how and when to use different materials, and I also gained a deeper appreciation for precision in the pursuit of creating the most perfect version of everything I fabricate, whether it be a combat vehicle, a motorcycle, or a retail display.

COVID: The Uninvited (Wedding) Guest
The pandemic had a ripple effect throughout the retail world. Specialty retailers - particularly those deemed to be non-essential - were forced to pivot quickly and alter the in-store experience to align with ever-changing health and safety protocols. Read on for a closer look at how bridal retailers adapted in the face of unprecedented challenges brought on by COVID-19.
The Retail Brilliance of the Star Wars Franchise
Star Wars' box office success is certainly impressive, but you may be surprised to learn that merchandise sales account for roughly four times the amount of revenue generated by ticket sales. Star Wars is one of the best examples of how deeply intertwined the entertainment and retail industries can become when pop culture and consumerism collide.
RETAIL VOICES: Alan McFarland
For our latest installment of Retail Voices, we spent some time with Alan McFarland. He joined our tech team as Director of Electronic Innovations just a short time ago. Like many of us at OnQ, Alan spent a good chunk of his career pursuing endeavors unrelated to retail before finding his way here.
Recent Posts
Copyright OnQ Solutions 2023 - All Rights Reserved | Terms of Use & Privacy Policy | Cookie Policy
Back To Top
We use cookies on our website to give you the most relevant experience by remembering your preferences and repeat visits. By clicking “Accept”, you consent to the use of all cookies.
Cookie settings Accept
Privacy & Cookies Policy

This website uses cookies to improve your experience while you navigate through the website. Out of these cookies, the cookies that are categorized as necessary are stored on your browser as they are essential for the working of basic functionalities of the website. We also use third-party cookies that help us analyze and understand how you use this website. These cookies will be stored in your browser only with your consent. You also have the option to opt-out of these cookies. But opting out of some of these cookies may have an effect on your browsing experience.
Necessary Always Enabled
Necessary cookies are absolutely essential for the website to function properly. This category only includes cookies that ensures basic functionalities and security features of the website. These cookies do not store any personal information.
Functional
Functional cookies help to perform certain functionalities like sharing the content of the website on social media platforms, collect feedbacks, and other third-party features.
Performance
Performance cookies are used to understand and analyze the key performance indexes of the website which helps in delivering a better user experience for the visitors.
Analytics
Analytical cookies are used to understand how visitors interact with the website. These cookies help provide information on metrics the number of visitors, bounce rate, traffic source, etc.
Advertisement
Advertisement cookies are used to provide visitors with relevant ads and marketing campaigns. These cookies track visitors across websites and collect information to provide customized ads.
Others
Other uncategorized cookies are those that are being analyzed and have not been classified into a category as yet.
Save & Accept
Powered by